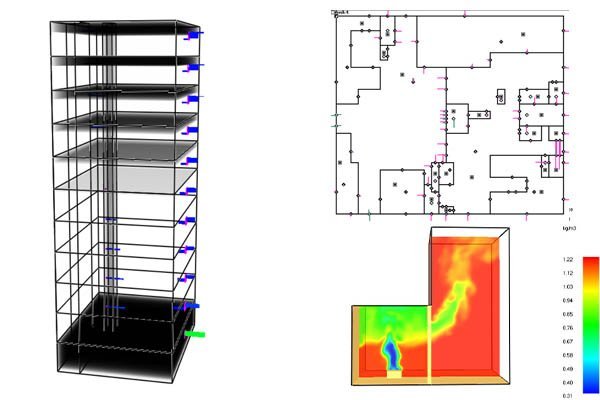 A lot of controversy sheds during discussions around smoke control systems in the Middle East in general. The smoke control engineering approach  emerged in the 1980s, especially after the MGM hotel fire incident. The first publication was done by ASHRAE in 1983. Different approaches which are mostly based upon no real calculations, such as using rules of thumb of a certain number of air changes per hour (ACH) or ready made spreadsheets that are based upon unknow undocumented assumptions.

Can these systems perform in case of fire and achieve their goals? is the main question.

I have been working with smoke control systems for years. I have been involved in their design testing and commissioning. I have gained a lot of experience in actual design, execution and testing the system’s performance relating the design to actual on grounds final accepted systems.

I have also been involved in systems that have been designed with an unclear design approach, ACH, and other chaotic systems where I have been involved in testing them and trying to turn them and modify them to a system that performs with the least interventions as possible. In structures that are multi story business towers, large multistory hospitals and other open area shopping malls and atriums.

I will try to share my experience in putting in place a guidance to actually know what approach needs to be taken. What implications would be there if we use a rule of thumb or a spreadsheet? Where do I need to extract and where do I need to pressurize. Before we get into those, we need to understand the smoke behavior and how smoke would transport from one room to another or one zone to another. I will try to quickly introduce the compartment fire behavior and how actually smoke is transported in a structure from one zone to another. We will also look at the scientific phenomenon involved in the smoke transport.

Compartment Fires:
Typically in a compartment fire, flaming or smoldering combustions generates smoke, large fires will generate plumes that grows conically as it elevates. The smoke plume is obstructed by the ceiling and turns into a ceiling jet that fills up the ceiling and starts growing into a smoke layer that is separated from the lower layer (there is a small transition zone) due to difference in densities (low density hot smoke layer and high density cold lower layer). Very minor mixing take place between those two layers and it is preferred to minimize the mixing of the upper and lower layer. Any wrongly design system or mechanical vent flows can lead to change in the behavior of a compartment fire into a turbulent compartment and mixing would be very unfavored due to the effect of turbulence on tenability and not being able to provide people with a safe mean of escape. The upper layer fed by the fire plume will keep descending down until it would fill the fire compartment or steady state at a certain height due to smoke transport. Below is a schematic that will allow us to understand those phenomenon visually.

As from what we learned in high school physics, the ideal gas law. In Fire Engineering approaches smoke is assumed to be an ideal gas with the same density as air. Hot smoke plumes are at elevated temperatures they become hotter the longer the fire as they descend down.

Smoke can either escape from door openings, leakages, joints, door leaks, windows, penetrations through the walls. The heat of the smoke layer in accordance with idea gas law will lead to an increased pressure (PV=nRT) further details can be found in Ideal gas law Wikipedia. As well as neutral plane compartment fire dynamics will cause high and low pressures to induce flow into and out of the compartment.

Stack and Reverse Stack Effect:
Stack effects are induced by the difference between the temperatures between inside and out side the building. The flows due to stack will neutralize towards the middle of the building and will draw smoke upwards in normal stack and downwards in reverse stack as shown in image below in courtesy of ASHRAE Handbook of smoke control engineering [5]. In Normal stack effect a fire in basement can lead to transport of smoke from basement to top levels flow of smoke would reduce until it becomes zero at neutral plane level (at building mid-height) leaving low half of the building smoke free other than the smoke zone. The design conditions as per ASHRAE climatic design conditions plays a major role in stack effects. 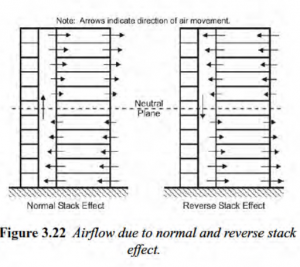 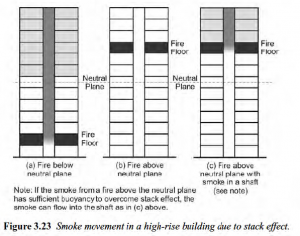 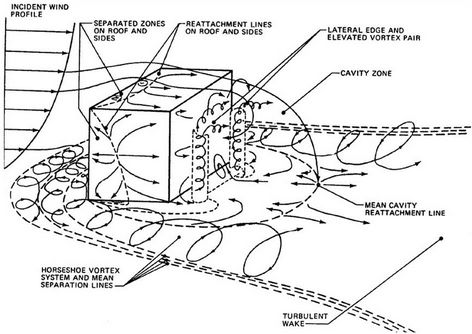 Below schematics show the effect of wind on stack effect and smoke movement within a building in case of fire without smoke control systems. 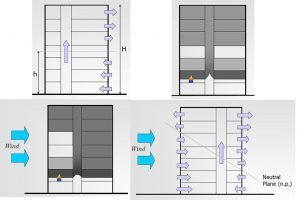 Smoke is a result of flaming or smoldering fires as we have discussed above. Smoke contains a lot of toxic gases such as CO, CO2, HCL, HBr among other toxic gases. These toxic gases can impair egress by 50% at concentrations as low as 4 – 200 ppm, and cause incapacitation at concentrations between 20-900 ppm [1]. Concentrations of HCN that are as low as 250 ppm can lead to death within 5 minutes [2]. HCN results from burning rubber like materials and some thermoplastics. Most egress calculations conducted assume no smoke impairing the escape thus assuming a fully effective smoke control system in case of fire.

Smoke can also affect humans by it’s radiative heat. Human starts feeling pain when the skin tissue reaches a temperature of 43 deg C. However, if core body temperature elevate to 43 deg C death will occur. Tenability limits of human exposure to smoke layer temperature of 120 deg C. Among all smoke limits visibility of humans during escape when looking at light reflecting or light emitting signs with a tenability limit of 5m to allow safe evacuation [3].

The next articles will discuss different types of smoke control systems design approaches that provide tenability requirements to evacuees. These approaches are highly dependent on the space and facility being protected and the goals and objectives.

Open Space or Atrium Smoke Control: in an atrium space smoke plum would elevate to the top then starts descending downwards leading to contact of evacuees with smoke as shown in figure below. The main objective of atrium smoke control is to maintain the clear height of the smoke layer above the ceiling of the heights floor. Smoke would typically be coming from a source in the middle of the atrium at ground floor. Depending on building complexity, sometimes fuel load in atrium is small and a fire in a near compartment leading to a balcony spill plum should be considered. One important factor is setting a design fire.
Choosing the design fire should be done by an experienced competent fire engineer, that will conduct a hazard analysis in accordance with SFPE in collaboration with stakeholders. Choosing a wrong generic design fire that would lead to lack of performance of the system.

Zoned Smoke Control: Smoke control in buildings would require a different approach, which is ensuring that smoke does not egress out of the area of origin to other zones, lobbies, zones. To determine the limits of the smoke zone is a synergy between time of egress, response of smoke detectors, alarms, and smoke control systems. Different arrangements of smoke control systems are detailed in NFPA 92 as per the below figure [4]. 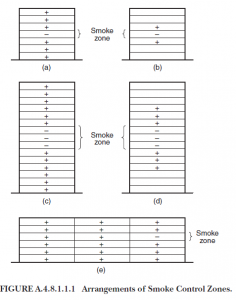 The main performance and design criteria to ensure that the differential pressure that is a result of compartment fire pressure that would be the main smoke transporting factor. In accordance with NFPA 92, depending on if the compartment is sprinkler controlled, or none sprinklered control and the height of none sprinkler controlled zone. Mostly the structures we are looking at are protected with automatic sprinkler systems as per NFPA 13, thus the pressure difference that we need to achieve is 0.05 in. w.g. (12.4 Pa) when we are trying to restrict fire from the zone of origin within a building [4].

With pressurization in the none fire side and doors being push to open in escape roots. Pressures exceeding a certain limit will limit the ability to open doors by exerting pressure on doors leading to high door opening force. In accordance with NFPA 92, the force shall not exceed 133 N [4].

Common Mistakes in Zone Smoke Control:
One of the most common mistakes seen in zoned smoke control systems is extraction in lobbies or means of egress. This can lead to drawing smoke into the means of egress from fire zone of origin. Usually negative pressure is only provided in zone of fire origin. It will only be acceptable if the system is designed in a none conventional way that was proven to work in a CFD analysis that was acceptable to AHJ or proven by any other means. Careful reviewed by a competent fire protection engineer for all fire scenarios in accordance with NFPA 101 guidance for performance based design fire scenarios should be made to ensure that these systems are safe.

Elevator Shaft and Staircase Pressurization:
Staircase and elevator shafts pressurization systems have similar approach to zoned smoke control systems to ensure that staircases are in tenable conditions to allow for safe evacuation. The main criteria will be maintaining a differential pressure of a minimum of 12.4 Pa, and a door opening force below 133N. If elevator shafts are operated in case of fire for evacuation of fire fighters activities designer shall take into consideration piston effect of the moving elevator cart [5].

How to calculate required flows:
Calculating flows will require careful consideration of all factors influencing the smoke transport. Consideration of wind, stack effects and reverse stack effects, leakages in walls, floors, and doors as well as make up air. In simple buildings (replicating floors, symmetrical buildings) they can be calculated via hand calculations. However, it is recommended to use computer software that are one of the following or similar:

In conclusion, Smoke Control Systems are vital systems for the safe egress of occupants. They should not be taken lightly by design engineers as they are affected by an overlapping set of physical weather, structure and fire effects.