How do Fire Protection Systems Work Together Against Fire Hazards

Fire protection systems are designed in a comprehensive manner. Often a building occupant would assume that having extinguishers or an automatic sprinkler system is sufficient for protecting him or the building from fire hazards. A single fire protection system such as suppression would not always be sufficient alone for protecting a facility for various reasons relating to reliability and availability of systems. As well as not being able to cover all of the goals and objectives of the fire safety. Fire Protection systems can be thought as barriers that protect a certain consequence from happening. The swiss cheese model is a good example of fire protection systems. Fire events occur historically at a certain frequency such as a number of incidents every ten years based upon the type of hazard. The barrier (swiss cheese with wholes) would fail if the incident happened to go through one of the wholes (unreliability) in the barrier. To reduce the probability of hazard causing an unwanted consequence the number of barriers would need to be increased.

The above model is directly represented in the fire scenario event tree analysis. In any hazard analysis, a deterministic approach of a fire scenario can be made to determine the consequences and their probabilities. For example ignition of an electric heater in a kitchenet would have several consequences. We assume in this example that three main fire protection systems that are available, manual suppression via extinguishers, automatic detection and suppression, and passive fire protection systems (fire rated walls, fire stopping and structural fire resistance rating). The figure below shows a sample fire event tree. It also provides the monetary outcome of each consequence. Every fire protection system would have a probability of being able to suppress the fire or failing against a specific event. This is a study that can be done by a competent fire engineer. Based on the probability of each system the risk value can be determined.

The above values are solely for example and do not represent a real fire scenario. Typically, they are calculated by engineering calculations, simulations, and historical statistical data, human response models, design fire curves that are based upon a deterministic or a probabilistic approach.

To illustrate the above example further, we would portray in the next couple of paragraphs the above event tree into scenarios for each barrier and explain how would it either fail or suppress the fire:

Occupant Action: the probability of the occupant action to work would depend on two major criteria, the first criteria would be possibility of occupants detecting the fire. It would be an easy task if occupants were in the compartment at the time of fire. Suppressing the fire would depend on how trained the personnel is and the response time of taking the decision often known as “fight-or-flight response”. If the fire was in another room, the possibility of sensing or smelling fire then reacting to it is an important factor. Usually, a fire can start with a small smoldering fire that would take long to be detected by fire alarms. It would be possible that it can be detected and extinguished by occupants before reaching to a flaming fire. All the above, would be taken into consideration through modeling the fire and applying human response to fire models.

Active Action: detection of the fire would depend on the type of fire, location of the detector and type of the detector. In some cases the fire detector would fail to detect fire in a timely manner, or fail due to lack of maintenance or sometimes being intentionally obstructed due to previous sporadic false activation.  Similarly, a sprinkler system is designed to suppress (control) the fire, or designed for extinguishment. Sprinkler systems would need to activate before the fire reaches a none controllable state. One example of the sprinkler system going out of control is having a non-expected transient load in a room such as a pile of furniture in an office due to cleaning or renovation activities. Or storage of materials that exceed the design allowance and hazard classification. One of the main causes of sprinkler systems failure is changing the use of the building. The below figures, shows how would a heat release rate of a fire vary due to suppression systems capabilities on controlling a certain fire. 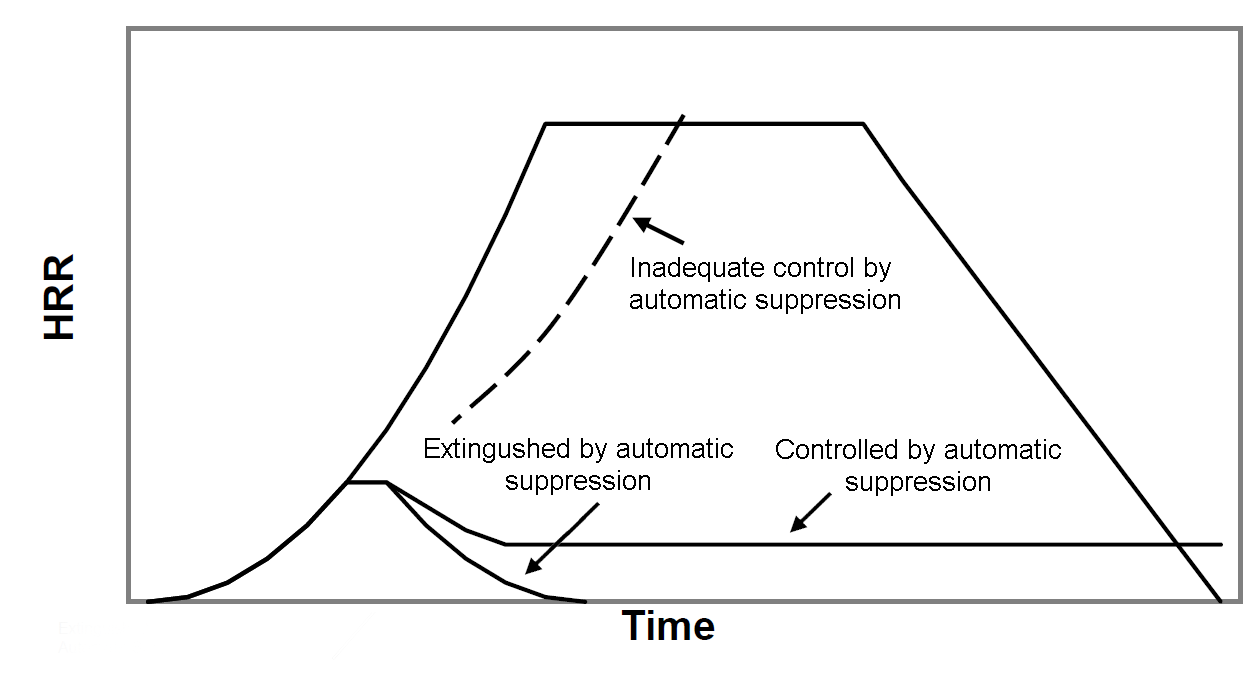 Passive Fire Protection: Passive Fire Protection means in this scenario would be the fire resistance rating of the walls, and the structure of the building. Fire Rated walls typically have penetrations that should be fire stopped. Fire Stopping is a very specific and detailed task if the wrong product was used, or not installed correctly in accordance to tested systems it would not provide its intent in case of fire. After installation the fire stop should be well maintained and inspections should take place to ensure that no alteration or damage was introduced. Proper installation and maintenance of fire stopping can mean the difference between a compartment fire and a structural fire. 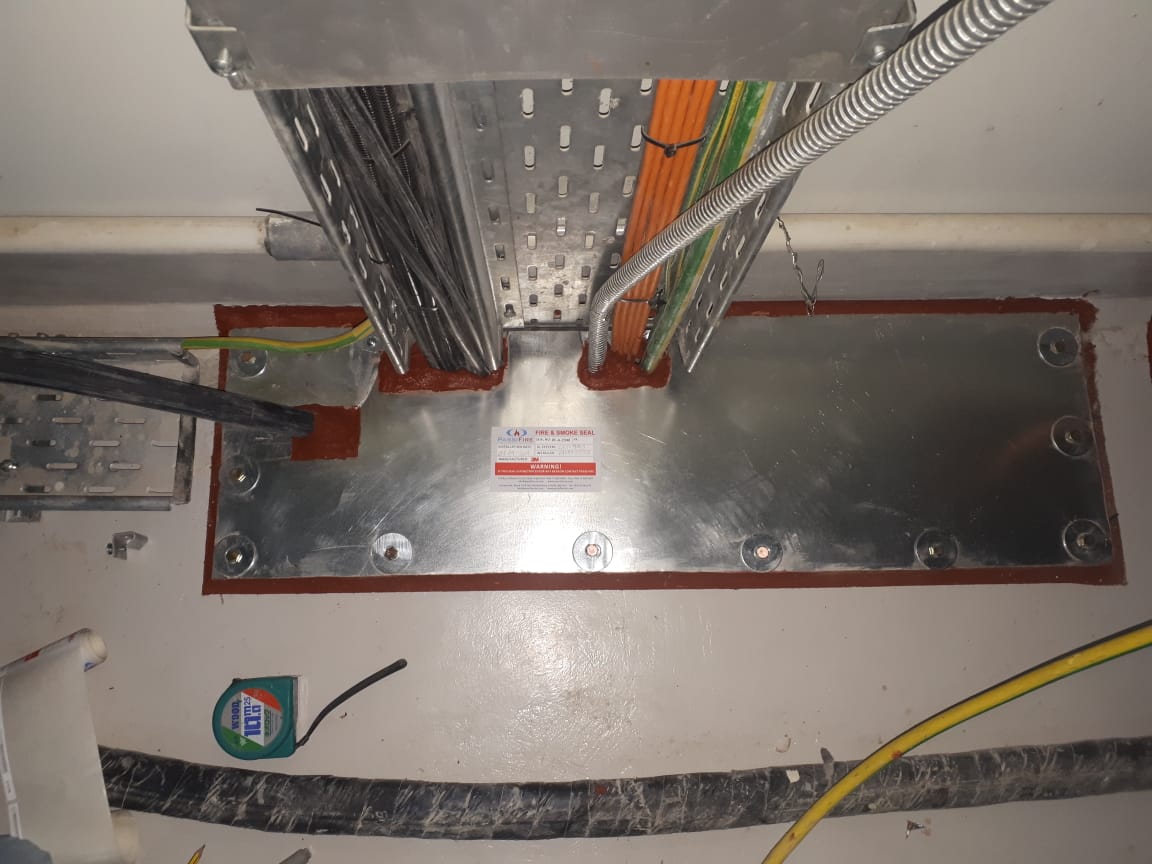 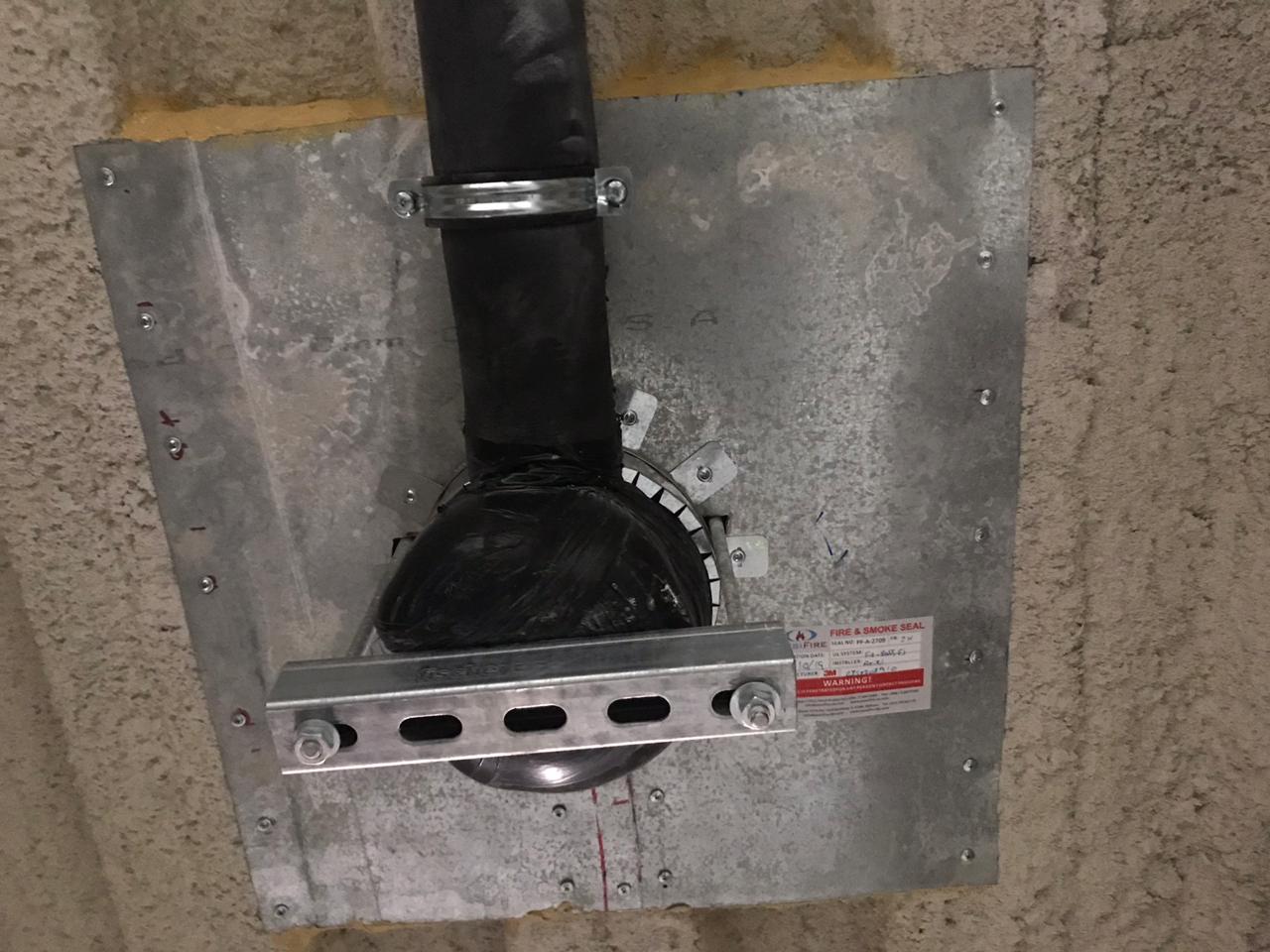 Structural Fire Resistance Rating, is another important passive fire protection measure, structural fire resistance rating duration is determined based upon the type of use and occupancy and area, number of levels and height of the structure. These would typically mean a fire load related and occupant risk related measures. Structural fire protection failure would lead to collapse to part of or the whole building. This can lead to trapping occupants trying to evacuate or fire fighters in their fire fighting activities. Structural collapse is one of the major cause of fire fighters deaths. Structural fire protection can fail due to wrongly specified fire resistance, under thickness in the application of protecting materials, using none tested systems or products that are not capable of providing the fire resistance rating, lack of maintenance to the applied material or using products that cannot withstand the environmental conditions and would deteriorate and erode by the time it is needed in case of fire.

Typically, building codes pre-analyze the capacity of fire brigade equipment and the response time to the fire event, the history and statistics of a specific region. All these play a role in writing building codes that would provide the minimum level of fire protection required based upon risk values that are acceptable to the Authority Having Jurisdiction (AHJ) for example department of civil defense in Saudi Arabia. Risk can be calculated as monetary values, or any other acceptable way of measuring risk, as an example number of acceptable deaths, or time of operation lost, or core damage frequency in nuclear industry.

Thus, it is important to understand that each part of the required fire protection systems in local codes and standards should be followed. Specifically, if they are higher or more stringent than international codes. As these local codes would be based upon local capacity and statistics. Some insurance companies would have special requirements provide additional barriers against a fire hazard to reduce their monetary risk.

Not having the sufficient number of barriers would lead to having the building, occupants and operation to a higher risks in case of fire event. This would be similar if systems were not maintained to ensure their performance case of a fire event.